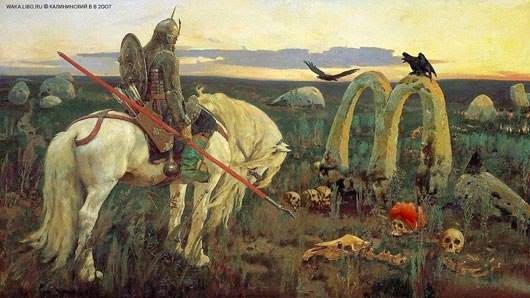 Right Sector. Horizons of Ukrainian revolution... Even when the geopolitical difference between the West and Russia still existed, Russia didn't fully met the defintion of the telluric power. I've already commented on Carl Schmitt's opposition between the Nomos of Sea (the thalassocratic, atlanticist powers) and the Nomos of Earth (telluric, continental bloc) with regard to USA and Russia, which has always been taken by Dugin for granted. Harun (Vadim) Sidorov, the author of the article "Russian State as a Nomad, a Natural Anarchist and Technocrat" (in Russian: http://ttolk.ru/?p=12600) fairly remarks that Russian identity has always been more nomadic (the Asian mobility), as opposed to European peasantry that is directly tied to the land where it lives and which it defends (definition of Partisan by Carl Schmitt, and by the way, self-description of the followers of Stepan Bandera). Russian state traditions have always been notable for the high bureaucratic centralization (monarchism-absolutism-despotism), as opposed to European high vertical mobility and the emphasis on the rights of aristocracy and local liberties; serfdom existed in Russia for a long time, till the very outbreak of revolution.

In this article Harun Sidorov thoroughly analyzes Dugin's Eurasianist geopolitical theory and refutes the very foundation of the latter. You know that Dugin believes that the world has become one-polar (USA is an absolute hegemon), that's why all who are connected with USA, serve their interests or help them somehow are "enemies," also in Carl Schmitt's sense. "There is only the geopolitical truth," "the third is not given," etc., so the multipolar world in the end turns out to be a binary space that consists of USA and Russia. The truth is another: the world has become one-polar indeed, but namely because Russian establishment (Kremlin) is no different from the neoliberal West: their struggle is the matter of power, not essentially different cultural-civilizational projects. Quoted by me on many occasions Russian-Ukrainian scientist, geopolitician and military Oleg Bakhtiyarov also beleives that today geopolitics loses its importance. But Harun Sidorov shows that Russian empire as long as it's empire couldn't represent the Nomos of Earth even before the end of the second world war.

Dugin's main argument is the myth of the hostile atlanticist agents that "conquer and divide" the telluric powers and Slavic nations (like Ukrainians and Russians, by convincing Ukrainians that "they are a separate nation that can affirm itself only if it defeats Russia"), but this argument fails as soon as we realize that 1) historically Russian allies have always been namely thalassocratic, atlanticist states, and it happened many times, in spite of the German conservative-revolutionary projects of continental blocs like "Berlin-Moscow-Tokyo": both during the first and the second world war Russia allied with atlanticist England against telluric, terrestrial Germany; besides, Russia fought against Napoleon, the representative of the coninental European forces, who offered Russia to join his battle against England and take away its colonies. Each time when such a possibility appeared, happened either conspiracy, or overthrow. 2) Ukrainians, as opposed to Russians, have European rather than Russian models of government: representatives of different estates had the possibility to raise their social status, which was even higher than in Poland (Oleg Odnorozehko); Hetman, the leader of Cossack state, equaled to European Prince, not monarch (tsar); Ukrainian Cossack state combined authoritarian hierarchic tradition with the democratic electoral institutions.

Models of government and the continental identity are directly interconnected: Harun Sidorov is right when he says that Dugin missed the main essence of the Nomos of Earth, the same as the fact that Schmitt developed his theory as a lawyer and a philosopher of politics. The "continental identity" does not automatically follows from the fact that certain state is overland, not an island country, and grows vegetables instead of trading and so on; the Nomos of Earth is derived from the verb "nemein" that means both "share" and "herd"; it's a "measure" that "divides the surface of the Earth" and makes "spacially visible political and social order of the people, the first measurement and demarcation of the grazing" (Schmitt). In other words, it's a matter of law and order, not sea and land as such. And Russian "internal structure has always been an opposite of the Nomos of the Earth - the complete absence or underdevelopment, non-proliferation of personal property, personal space, guarantees and the inviolability of private interests, and, at all levels - not only driven into slavery grassroots population, but also the feudal aristocracy and burghers from tensions between which grew the legal and social order, the Nomos of the continental Europe" (H.S.). That's why Russia has always tried to expand, in the times of USSR - across the whole world, but not incidentally in the end all its geopolitical acquirements like Ukraine separated - for they have different Nomos of Earth, more precisely, they simply have the latter, as opposed to imperialistic Russia. So the difference between USA and Russia on the fundamental level does not exist, for Russia acts like the sea British empire.

Even Nikolai Berdiayev wrote that Russians are "the most anarchist and nomadic people on Earth," they are against law and state, which was peculiar both for real leftist anarchists like Bakunin and Kropotkin and "right-wing" Slavophiles like Dostoievsky and Tolstoy. This is the first anarchist and nomadic line of Russian statehood. The second line is represented by the late Roman Caesarism that is reinforced by Russian dreams about the Third Rome, which is not justified both with regard to the Byzantine Empire that has never been a direct successor of Rome, nor with regard to original republican Rome that was a "nomocratic empire par excellence" and gave birth to classic Roman and European civil law. This is the second technocratic and ceasarist line of Russian statehood.

"This is late Rome, imperialist and caesarist, torn from its roots and paternal manners, which after the Edict of Caracalla ultimately turned into a multiracial mob, has become a tool of degeneration of Romans and suppression of the peoples that they conquered. This Caesarist mythology, designed to replace the simple and austere paternal manners, was inherited by Russian imperialism, Russian Roman myth." (H.S.)

Conclusion: Back to original Kyivan Rus' against the corrupt and entropic empires!
Опубліковано Unknown о 13:59